The Power and the Glory (Paperback) 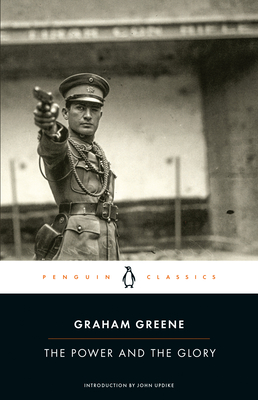 The last priest left in Mexico after a violent military takeover is...not your top pick. The unnamed "whisky priest" stumbles throught the jungle and bombed out villages, slipping away from the soldiers and his own conscience. Harrowing, fatalistic, illusion-less, this classic pre-figures Cormac McCarthy and Martin Scorsese and somehow remains life-affirming.

One of the greatest novels of the twentieth century, in a new edition commemorating its 75th anniversary

Seventy-five years ago, Graham Greene published The Power and the Glory, a moralist thriller that traces a line of influence back to Dostoyevsky and forward to Cormac McCarthy. Named one of the 100 best novels of the twentieth century by Time magazine, it stands today as his masterpiece.

Mexico, the late 1930s: A paramilitary group has outlawed the Catholic Church and is executing its clergy. Now the last priest is on the run, fleeing not just an unshakable police lieutenant but also his own wavering morals. As he scraps his way toward salvation, haunted by an affair from his past, the nameless “whiskey priest” is pulled between the bottle and the Bible, tempted to renounce his religion yet unable to ignore the higher calling he’s chosen. Timeless and unforgettable, The Power and the Glory is a stunning portrait of both physical and spiritual survival by a master dramatist of the human soul.

For more than seventy years, Penguin has been the leading publisher of classic literature in the English-speaking world. With more than 1,700 titles, Penguin Classics represents a global bookshelf of the best works throughout history and across genres and disciplines. Readers trust the series to provide authoritative texts enhanced by introductions and notes by distinguished scholars and contemporary authors, as well as up-to-date translations by award-winning translators.

GRAHAM GREENE (1904-1991), whose long life nearly spanned the length of the twentieth century, was one of its greatest novelists. Educated at Berkhamsted School and Balliol College, Oxford, he started his career as a sub-editor of the London Times. He began to attract notice as a novelist with his fourth book, Orient Express, in 1932. In 1935, he trekked across northern Liberia, his first experience in Africa, told in A Journey Without Maps (1936). He converted to Catholicism in 1926, an edifying decision, and reported on religious persecution in Mexico in 1938 in The Lawless Roads, which served as a background for his famous The Power and the Glory, one of several “Catholic” novels (Brighton Rock, The Heart of the Matter, The End of the Affair). During the war he worked for the British secret service in Sierra Leone; afterward, he began wide-ranging travels as a journalist, which were reflected in novels such as The Quiet American, Our Man in Havana, The Comedians, Travels with My Aunt, The Honorary Consul, The Human Factor, Monsignor Quixote, and The Captain and the Enemy. As well as his many novels, Graham Greene wrote several collections of short stories, four travel books, six plays, two books of autobiography, A Sort of Life and Ways of Escape, two biographies, and four books for children. He also contributed hundreds of essays and film and book reviews to The Spectator and other journals, many of which appear in the late collection Reflections. Most of his novels have been filmed, including The Third Man, which the author first wrote as a film treatment. Graham Greene was named Companion of Honour and received the Order of Merit among numerous other awards.

JOHN UPDIKE (1932-2009) was the author of more than sixty books, including collections of short stories, poems, and criticism. His novels have been honored with the Pulitzer Prize (twice), the National Book Award, and the Howells Medal of the American Academy of Arts and Letters. Hugging the Shore, an earlier collection of essays and reviews, received the National Book Critics Circle Award for criticism. He died in January 2009.

“Greene’s masterpiece . . . The energy and grandeur of his finest novel derive from the . . . will toward compassion. . . . It succeeds . . . resoundingly.” —John Updike, from the Introduction

“[Greene] captured the conscience of the twentieth century like no other.” —William Golding, Nobel Prize–winning author of Lord of the Flies

“No serious writer of [the twentieth] century has more thoroughly invaded and shaped the public imagination as did Graham Greene.” —Time

“Greene had wit and grace and character and story and a transcendent universal compassion that places him for all time in the ranks of world literature.” —John le Carré

Redwall: A Tale from Redwall (Paperback)