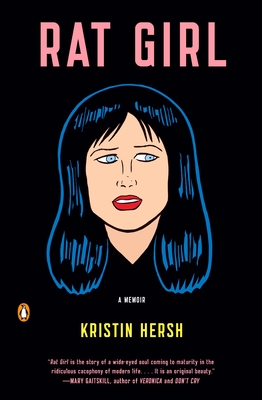 A powerfully original memoir of pregnancy and mental illness by the legendary founder of the seminal rock band Throwing Muses, 'a magnificently charged union of Sylvia Plath and Patti Smith'  - The Guardian

Kristin Hersh was a preternaturally bright teenager, starting college at fifteen and with her band, Throwing Muses, playing rock clubs she was too young to frequent. By the age of seventeen she was living in her car, unable to sleep for the torment of strange songs swimming around her head - the songs for which she is now known. But just as her band was taking off, Hersh was misdiagnosed with schizophrenia.

Rat Girl chronicles the unraveling of a young woman's personality, culminating in a suicide attempt; and then her arduous yet inspiring recovery, her unplanned pregnancy at the age of 19, and the birth of her first son. Playful, vivid, and wonderfully warm, this is a visceral and brave memoir by a truly original performer, told in a truly original voice.

Kristin Hersh: Influential songwriter, mulit-instrumentalist, and author she is the leader of the indie rock band Throwing Muses and 50 Foot Wave. She records solo as well.  Over the last three decades, Hersh has released more than 20 records which have sold more than one million copies worldwide. Her books include Rat Girl, Don't Suck, Don't Die and Seeing Sideways.

"Compelling...Hersh describes eloquently, beautifully and with no small amount of poetry the pain and alienation of losing one's mind." -- The Times (London)

“Funny, freaky, fidgety, Hersh's memoir is the book a fan didn't dare hope for: a beacon in a dark field, illuminating the mysterious and the mundane. Beautifully, honestly, written and as close as you will ever get to being in a Throwing Muses song.” – Wesley Stace, author of Misfortune and By George


“Her narrative voice is warm, friendly and surprisingly funny. Deep down it's a story about messed-up kids finding one other, starting a band, and accidentally scrounging up an audience of similarly messed-up kids. It belongs on the shelf next to Michael Azerrad's classic Our Band Could Be Your Life.” – Rolling Stone
“Ultra-vivid writing and intense honesty is what you'd expect from Kristin Hersh, one of America's finest songwriters. But Rat Girl is also a startlingly funny and touching memoir of her mid-Eighties moment as the bi- polar, pregnant, intermittently homeless frontwoman of a rising indie-rock band. It's a gripping journey into mental chaos and out the other side.” – Simon Reynolds, author of Rip It Up and Start Again: Postpunk 1978-84

“Rat Girl is the story of a wide-eyed soul coming to maturity in the ridiculous cacophony of modern life. Although it is supposedly about what we call, for lack of a better term, 'manic depression,' it has nearly no interest in such grim diagnostic thinking. It is instead awestruck - by music, feeling, perception, wild animals, mystery, dreams, 'the gorgeous and terrible things that live in your house.' It is an original beauty.” – Mary Gaitskill, author of Veronica and Don't Cry

The Second Sleep: A novel (Paperback)