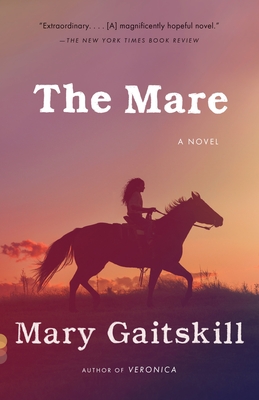 “The Mare is the heart-wrenching story of a young inner-city girl in the Fresh Air Fund program who travels to a host family in upstate New York, where she befriends a frightened and abused racehorse at a nearby stable. Gaitskill navigates the ugly realities of both human and equine abuse, but, ultimately, this is a triumphant novel shaped by authentic characters and in which trust and determination win. Readers will be reminded of how our real-life connections with animals can both guide and heal.”
— Nancy Scheemaker (W), Northshire Bookstore Saratoga, Saratoga Springs, NY

When Velveteen Vargas, an eleven-year-old Fresh Air Fund kid from Brooklyn, comes to stay with a family in upstate New York, what begins as a two-week visit blossoms into something much more significant. Soon Velvet finds herself torn between her host family—Ginger, a failed artist and shakily recovered alcoholic; and Paul, a college professor—and her own deeply tormented mother. The one constant becomes Velvet’s newly discovered passion for horse riding—and especially for an abused, unruly mare named Fugly Girl. A stirring and deeply felt novel, The Mare is Mary Gaitskill’s most poignant and powerful work yet—a stunning exploration of a girl and her horse, and of the way we connect with people from all walks of life.

Mary Gaitskill is the author of the story collections Bad Behavior, Because They Wanted To (nominated for a PEN/Faulkner Award), and Don’t Cry, and the novels Veronica (nominated for a National Book Award) and Two Girls, Fat and Thin. She has received a Guggenheim Fellowship, and her work has appeared in The New Yorker, Harper’s, Esquire, The Best American Short Stories, and The O. Henry Prize Stories.

“Brave and bold. . . . The range of Gaitskill’s humanity is astonishing.” —Los Angeles Times

“Gaitskill is such a preternaturally gifted writer that nearly every page of The Mare shimmers with exacting and sometimes hallucinatory observation.” —The New York Times

“[An] extraordinary artistic achievement. . . . Bracing in its rigorous truth-seeking, subtle and capacious in its moral vision, Gaitskill’s work feels more real than real life and reading her leads to a place that feels like a sacred space.” —The Boston Globe

“The Mare is indebted, in its narrative strategy, to As I Lay Dying, another novel that employs a host of recurring narrators to get at the tangled intricacies of family life. . . . [Velvet] is that most wonderful of fictional creations: a convincing child who manages to be a captivating and perceptive narrator.” —The New Yorker

“[Gaitskill’s] gift is to unfold emotions, no matter how petty or upsetting, and describe them with disarming patience. . . . The result often feels both primal and electric, something like a latter-day D. H. Lawrence.” —Chicago Tribune

“Piercingly poignant. . . . Give[s] eloquent voice to the ineffable thoughts and feelings experienced across boundaries of age and race and class and gender—and even, in this case, species.” —Minneapolis Star Tribune

“Gaitskill is more than a gifted story-teller. She is an enchanter. . . . The power of [her] writing comes, in part, from her ability to evoke strong emotions without offering the resolutions readers have come to expect.” —New Republic

“The Mare ripples with internal emotional movement, but it is also a physical novel. . . . Nothing stands still, not the horses, not the violent mother or the would-be mother, not the vicious jealous friends, not the boyfriend or husband, not the sky.” —Cathleen Schine, The New York Review of Books

“The Mare is classic Gaitskill. . . . In [her] hands, even the most raw and fleeting moments drip with complexity.” —Elle

“Gaitskill builds her story through rotating first-person narratives. . . . [Her] structure allows her to spotlight the limitations in every character’s perspective while nevertheless fostering sympathy for each of them. And the voices ring true.” —Milwaukee Journal Sentinel

“To know these characters and to judge this book, you have to read every word, and be ready to have your own prejudices challenged.” —The Buffalo News

“I can think of no other living writer who so deftly feels into the corners of each of her characters’ emotions.” —Liz Cook, The Kansas City Star

When I Was a Child I Read Books: Essays (Paperback)