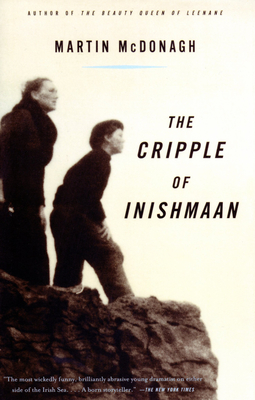 The sick, twisted, brilliant mind behind In Bruges and Three Billboards first exploded onto the scene with pitch-black comic plays set in the unromantically impoverished West of Ireland. Blowing up the pastoral idyll of The Quiet Man, these plays are both the funniest and most disturbing things you'll read tonight. Ever.

In 1934, the people of Inishmaan learn that the Hollywood director Robert Flaherty is coming to the neighboring island to film a documentary. No one is more excited than Cripple Billy, an unloved boy whose chief occupation has been grazing at cows and yearning for a girl who wants no part of him. For Billy is determined to cross the sea and audition for the Yank. And as news of his audacity ripples through his rumor-starved community, The Cripple of Inishmaan becomes a merciless portrayal of a world so comically cramped and mean-spirited that hope is an affront to its order.

Martin McDonagh's first play, The Beauty Queen of Leenane, was nominated for six Tony Awards, of which it won four, and the Laurence Olivier Award. In 2003, his play The Pillowman had its world premiere at the National Theatre, London, and received the 2004 Olivier Award. In 2006, McDonagh won an Oscar for his short film Six Shooter. In 2009, In Bruges won a BAFTA for best original screenplay. His most recent works include In Bruges, A Behanding in Spokane, and Seven Psychopaths.

The Flying Troutmans: A Novel (Paperback)