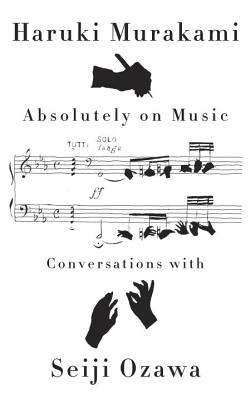 “To sit down with Absolutely on Music is to sit down with two maestros -- acclaimed writer Haruki Murakami, in a way you've never experienced him before, and famed conductor Seiji Ozawa who lives and breathes classical music. This book is the result of several conversations over two years between the two friends that focused on the music they both love, on writing, and on how the two connect. Written by Murakami in a question-and-answer format, Absolutely on Music offers note-by-note talks about classical music and about Ozawa's and Murakami's lives and the intricacies of both. Readers will hear the music!”
— Terry Tazioli (M), University Book Store, Seattle, WA

A deeply personal, intimate conversation about music and writing between the internationally acclaimed, best-selling author and the former conductor of the Boston Symphony Orchestra.

In Absolutely on Music, internationally Haruki Murakami sits down with his friend Seiji Ozawa, the revered former conductor of the Boston Symphony Orchestra, for a series of conversations on their shared passion: music. Over the course of two years, Murakami and Ozawa discuss everything from Brahms to Beethoven, from Leonard Bernstein to Glenn Gould, from Bartók to Mahler, and from pop-up orchestras to opera. They listen to and dissect recordings of some of their favorite performances, and Murakami questions Ozawa about his career conducting orchestras around the world. Culminating in Murakami’s ten-day visit to the banks of Lake Geneva to observe Ozawa’s retreat for young musicians, the book is interspersed with ruminations on record collecting, jazz clubs, orchestra halls, film scores, and much more. A deep reflection on the essential nature of both music and writing, Absolutely on Music is an unprecedented glimpse into the minds of two maestros.

HARUKI MURAKAMI was born in Kyoto in 1949 and now lives near Tokyo. His work has been translated into more than fifty languages, and the most recent of his many international honors is the Jerusalem Prize, whose previous recipients include J. M. Coetzee, Milan Kundera, and V. S. Naipaul.

Translated from the Japanese by Jay Rubin.

“What most fascinates about Absolutely on Music is how it unlocks the challenging question of what makes for genius in the performance of music. . . . [It is] a book that opens a new side of [Murakami’s] authorial persona and that will open doors for people who want to love classical music. It is a quirky, oddly compelling book carried along by the smooth, laid-back rhythms of its relaxing conversations. Reading it, I found myself digging out pieces I hadn’t listened to in ages, engaged with a newfound appreciation. . . . Readable, accessible, highly entertaining, educational.” —Scott Esposito, San Francisco Chronicle

“Fascinating. . . . Ozawa is a beloved figure, known more for his modesty, preparation and smiling-hippie looks than for breaking batons. In Absolutely on Music, he appears in conversation with his countryman, the renowned Japanese novelist Haruki Murakami. Their discussions are prompted by listening to recordings together and range from musical personalities to the nuts and bolts of running an orchestra. Mr. Murakami is a non-musician who is nevertheless quite well-listened. . . . Murakami stays in the background of these conversations, but his preparation and curiosity draw out Mr. Ozawa wonderfully.” —The Wall Street Journal

“Absolutely on Music is an unprecedented treasure, valuable if for no other reason than that these conversations mark the first time that Ozawa has reflected at length on his 50-plus years of conducting. . . . Talking about music is like dancing about architecture, it’s often said, but what joy to watch these two friends dance. . . . One of this book’s central pleasures is that of watching a kind of translation at work. With an enthusiast’s brio, Murakami sallies forth with his idiosyncratic, often fanciful ideas about Ozawa’s music.” —The Guardian

“Refreshingly honest and enthusiastic, a mental sampler from both the writer and the musician. . . . The subject matter veers and twirls, from the philosophy of education to the phrasing of a specific passage, to the bringing out of an inner voice. And perhaps therein lies the charm of this book—material that only a music wonk could love, some spicy ‘Real Housewives of Vienna’ type dish, intellectual probing of the most arcane musical subjects, and personal expressions of amazement and sheer joy.” —The Buffalo News

“Fascinating. . . . Enthralling. . . . What comes through in these conversations is the devotion both men feel for music; the degree to which every detail of a work matters to them; and the strength of their yearning to connect to great symphonies and concertos (and the composers who penned them).”—The Seattle Times

"A useful guide [that] is also about the way the concert hall's values of composition and rhythm can apply to any kind of creative life." —A.V. Club

“Intriguing insights about the nature of music. . . . Deliberate and contemplative. In some ways, these conversations are High Fidelity for classical music fans.” —Publishers Weekly

“A strange and delightful book. Murakami and Ozawa sit sipping hot hojicha tea, snacking on persimmons, and discussing in riveting detail works by Mahler, Bartok, Beethoven, Brahms, and many other central figures in the history of Western music. . . . While he defers to Ozawa on technical matters, [Murakami] describes music with rich and suggestive metaphors and images that capture something essential about the spirit of the music.” —The Christian Science Monitor

“Transcribed from conversations between the phenomenal Japanese author Murakami (who ran a jazz club in his youth) and magician-with-a-baton Seiji Ozawa, whom I remember fondly as conductor of the Boston Symphony Orchestra in my student days long, long ago? I cannot resist. For all your smart readers.” —Barbara Hoffert, Library Journal

“Engaging. . . . [Murakami’s] knowledge of music is beyond impressive, as anyone who has read his novels already knows. He loves jazz, and one of the most interesting passages involves exchanges about blues in Chicago in the 1960s. Ozawa also declares a deep admiration for Louis Armstrong. . . . A work that general readers will enjoy and the musical cognoscenti will devour.” —Kirkus Reviews

“The book shines as a deep exploration into how a conductor does his job and how performer personalities, logistical factors, and mundane bureaucracies can change an orchestra’s sound. . . . The book also dishes insider gossip on the greats: Leonard Bernstein is a anti-hierarchical mensch, while Glenn Gould is a fascinating ‘eccentric.’” —New Republic

“A special book. . . . Look to this for insights into the broader world of music.” —The Worcester Telegram

“Soaring conversations that are at times erudite, funny and deeply personal. . . . An important and engaging reflection on the career of a great conductor.” —The Providence Journal

“Haruki Murakami loves music, from naming one of his most beloved novels Norwegian Wood (recalling the hit from The Beatles) to being the former owner of a jazz club in Tokyo. In these brilliantly illuminating conversations with his friend, the former conductor of the Boston Symphony Orchestra, Seiji Ozawa, these two creatives discuss the power of music. From pop-up orchestras to Brahms, these two insightful artists trace the way music has impacting them and society in general.” —BookRiot

“[A] glimpse into the minds of . . . two maestros and their creative process. Never a stormy debate, the talks make sweet melodies that may linger on for many readers—especially book and music lovers. . . . This book is easy reading and music is ‘absolutely’ the winner.” —Otago Daily Times (New Zealand)

In the Heart of the Sea: The Tragedy of the Whaleship Essex (Paperback)