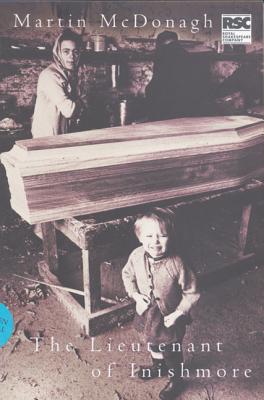 The sick, twisted, brilliant mind behind In Bruges and Three Billboards first exploded onto the scene with pitch-black comic plays set in the unromantically impoverished West of Ireland. Blowing up the pastoral idyll of The Quiet Man, these plays are both the funniest and most disturbing things you'll read tonight. Ever.

A farcical look at political violence as it's played out during the Troubles in Northern Ireland against the drab backdrop of a bare, rustic Irish cottage and unending boredom in an inhospitable environment in which a mutilated cat sets off a murderous cycle of revenge.

Wee Thomas was a friendly cat. He would always say hello to you were you to see him sitting on a wall. (Pause.) He won't be saying hello no more, God bless him. Not with that lump of a brain gone. Who knocked Wee Thomas over on the lonely road on the island of Inishmore, and was it an accident? "Mad Padraig" will want to know when he gets back from a stint of torture and chip shop bombing in Northern Ireland: he loves that cat more than life itself.

"Gleeful, gruesome play about political terrorism in rural Ireland, which won the Olivier Award for best comedy...Appallingly entertaining...Enlightening..."Lieutenant" is brazenly and unapologetically a farce. But it is also a severely moral play, translating into dizzy absurdism the self-perpetuating spirals of political violence that now occur throughout the world."—The New York Times "A cautionary fairy tale for our toxic times. In its horror and hilarity, it works as an act of both revenge and repair, turning the tables on grief and goonery, and forcing the audience to think about the unthinkable."—The New Yorker

"There's more than one way to skin a theatrical cat; and McDonagh's chosen weapons are laughter and gore Pushing theatre to its limits, McDonagh is making a serious point a work as subversive as those Synge and O'Casey plays that sparked Dublin riots in the last century."—Guardian

"A brave satire Swiftianly savage and parodic with explicit brutal actino and lines which sing with grace and wit."—Observer

“In the person of a man who can break off from torturing a chain-suspended victim to have a fretful mobile phone conversation about the health of his cat, McDonagh makes mock of the psychotic sentimentality of Irish nationalist terrorism.”—Independent

The Changeling: A Novel (Paperback)