The Book of Strange New Things: A Novel (Paperback) 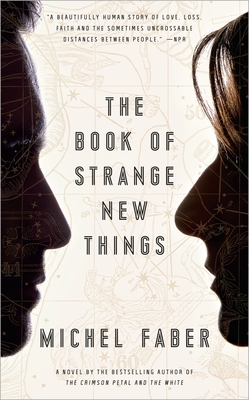 Peter is a Christian missionary in a VERY distant land. He has only his faith, his wife's love, and his Bible, which the "natives" call "the book of strange new things." But how do you explain Jesus and the parables to beings of another planet? While Peter ministers to the peope of Oasis, Earth is falling apart. In this uniquely memorable book, Faber asks if faith--in God, in love, in civilization--can survive the end of the world.

“Peter Leigh is an evangelical Christian pastor whose mission to serve the Lord leads him into space, where he ministers to an alien race. But is he truly converting them, or is his faith leading them astray? Questions abound: Why wasn't his wife allowed to accompany him? Why is everyone in the human base camp uninterested in the catastrophes that are befalling Earth while they are light years away? Why was Peter's appointment as pastor to the aliens so urgent? Faber does a great job addressing the question of faith and its consequences. A great book group selection!”
— Susan Taylor, Market Block Books, Troy, NY

A monumental, genre-defying novel that David Mitchell calls "Michel Faber’s second masterpiece," The Book of Strange New Things is a masterwork from a writer in full command of his many talents.

It begins with Peter, a devoted man of faith, as he is called to the mission of a lifetime, one that takes him galaxies away from his wife, Bea. Peter becomes immersed in the mysteries of an astonishing new environment, overseen by an enigmatic corporation known only as USIC.   His work introduces him to a seemingly friendly native population struggling with a dangerous illness and hungry for Peter’s teachings—his Bible is their “book of strange new things.” But Peter is rattled when Bea’s letters from home become increasingly desperate: typhoons and earthquakes are devastating whole countries, and governments are crumbling.  Bea’s faith, once the guiding light of their lives, begins to falter.

Suddenly, a separation measured by an otherworldly distance, and defined both by one newly discovered world and another in a state of collapse, is threatened by an ever-widening gulf that is much less quantifiable.  While Peter is reconciling the needs of his congregation with the desires of his strange employer, Bea is struggling for survival.  Their trials lay bare a profound meditation on faith, love tested beyond endurance, and our responsibility to those closest to us.

Marked by the same bravura storytelling and precise language that made The Crimson Petal and the White such an international success, The Book of Strange New Things is extraordinary, mesmerizing, and replete with emotional complexity and genuine pathos.

MICHEL FABER is the internationally bestselling and critically acclaimed author of The Crimson Petal and the White, Under the Skin—shortlisted for the Whitbread First Novel Award—and several other books. Faber has won many short story awards and his writing has appeared in Granta, The O. Henry Prize Stories, among others.  He lives in Scotland.


“Defiantly unclassifiable. . . . The Book of Strange New Things squeezes its genre ingredients to yield a meditation on suffering, love and the origins of religious faith. . . . Faber reminds us there is a literature of enchantment, which invites the reader to participate in the not-real in order to wake from a dream of reality to the ineffability, strangeness, and brevity of life on Earth.” —Marcel Theroux, The New York Times Book Review (cover review)

“Profoundly moving. . . . . A vivid portrait of a distant galaxy, reinforced by a narrative that is deeply, emotionally evocative.” —USA Today

“Elegant. . . . A lovely, thought-provoking meditation on love and faith and the never-ending mysteries of the natural world.” —Entertainment Weekly

“Eerie and ambitious. . . . Faber is a genuinely gifted storyteller and his novel gains resonance and tidal force in its final third.” —The New York Times

“Faber illustrates, movingly, the impossibility of adequate communication in the face of life-changing experience. . . . Rich and memorable.” —The New Yorker

“Fascinating…Poignant…Remarkable… Despite its bizarre setting and all the elements of an interplanetary opera, this is a novel of profound spiritual intimacy….  I relished every chance to cloister myself away with “The Book of Strange New Things”…[It] offers exactly what I crave: a state of mingled familiarity and alienness that leaves us with questions we can’t answer — or forget.”—Ron Charles, Washington Post

“One of the best books I’ve ever read. . . . It’s a love story, and the last line destroyed me.” —Emily St. John Mandel, The Millions

“Faber's great strength, trotted out right from the opening pages — this ability to write believable, lovely, flawed and inept characters. To animate his creations by exposing their great loves and human frailties, and to make us want, somehow, to follow along behind them…Faber tells a beautifully human story of love, loss, faith and the sometimes uncrossable distances between people.”—NPR.org, “All Things Considered”

“Harrowing, wrenching. . . . A bold and unexpected work of beauty. . . . Faber’s sincerity keeps The Book of Strange New Things honest, and his talent steers him away from cliché.” —The New Republic

“A wonderful adventure story, a quasi-science fiction tale and a probing examination of a marriage. . . . A truly strange and wonderful novel. . . . Please read Michel Faber’s The Book of Strange New Things. You won't regret it.”—Cleveland Plain-Dealer

“I would almost like to say, ‘Read this book,’ and leave it with that. Because its charms, and they are considerable, are so tied with discovering what the heck is going on. That challenges a reviewer, because almost anything I tell you will spoil a moment of discovery…the writing is such a pleasure.”—Dallas Morning News

“[Faber] approaches this interplanetary saga as an expert genre traveler. . . . [His] potent new amalgam of sci-fi and spirituality puts him within rocket range of David Mitchell.” —New York

“This is a big novel . . . but the reader is pulled through it at some pace by the gothic sense of anxiety that pervades and taints every element. . . . Astonishing and deeply affecting.” —The Guardian

“A novel so full of ideas, so charged by plot, so odd and wonderful, and written with astonishing emotional precision. There are some novels that come along every now and again, when writing a review seems superfluous and all one wants to do is to grab someone by the shoulders and say: “Look, just read the damn thing!” This is one of them. Michel Faber always has had an astonishing ability to make the strange believable and the alien real, but in this thoughtful, deeply moving page-turner, he excels himself.” —The Scotsman

“A hugely serious story about the testing of religious faith. . . . When [Peter’s] spiritual crisis does indeed hit it is as gripping as any thriller. . . . A work of originality and insight.” —The Times

“A moving human drama disguised as a gripping science fiction tale. . . . Magnificently bold and addictive. . . . A book quite unlike any other I've ever read.” —The Sunday Times

“Faber’s new novel grapples with [what it means to be human] in unusually direct terms. . . . The fascination of [his] prose style is its lack of sensationalism. His voice on the page is serene and oddly innocent. . . . One might call The Book of Strange New Things sci-fi, speculative fiction, literary fiction—or maybe just welcome it, thankfully, with a ‘Never before now.’” —The Independent (UK)

“Spellbinding, heartbreaking and mind-bending. . . . This is very much a book that rewards re-reading; its subtle echoes and wisps of allusion reverberate across the text. . . . The Book Of Strange New Things is Faber’s strongest, most plangent and most intellectually gleeful novel. It is affecting as much as it is challenging. . . . Bold, brave, brilliant. . . . It’s also, by the way, the most wonderful love story.” —Scottish Review of Books

“Brilliant, and disquieting. . . . Faber’s novel is entirely true to itself and wonderfully original. It makes a fine update to Walter M. Miller Jr.’s Canticle for Leibowitz, with some Marilynne Robinson-like homespun theology thrown in for good measure. . . . A profoundly religious exploration of inner turmoil.” —Kirkus (starred review)

“A marvelously creative and intricate novel, thought-provoking and arresting.” —Booklist

“A monumental, genre-defying novel over ten years in the making, Michel Faber’s The Book of Strange New Things is a masterwork from a writer in full command of his many talents.”—Book Browse, Selected as a Top Book of 2014

“The book wears its strong premise and mixture of Biblical and SF tropes extremely well.”—Publishers Weekly

“At the heart of The Book of Strange New Things is one question: Whom—or what—do you love, and what are you willing to do for that love (or not willing)? The result is a novel of marvel and wonderment with a narrative engine like a locomotive.” —Yann Martel

“In my opinion The Book of Strange New Things is Michel Faber’s second masterpiece, quite different to The Crimson Petal and the White but every bit as luminescent and memorable.  It is a portrait of a living, breathing relationship, frayed by distance.  It is an enquiry into the mountains faith can move and the mountains faith can’t move.  It is maniacally gripping.  It is vibrant with wit and overcast with prescience and social commentary.  Like all superlative science fiction, its real subject is that most mystifying of alien species, humanity. I didn’t so much read The Book of Strange New Things as inhabit it, the way you inhabited that handful of books which, as a kid, first got you hooked on this wonderful drug known as reading.” —David Mitchell

“Michel Faber’s The Book of Strange New Things certainly lives up to its title.  Faber, as he showed in Under the Skin, does strangeness brilliantly. I can’t remember being so continually and unfailingly surprised by any book for a long time, and part of the surprise is the tenderness and delicacy with which he shows an emotional relationship developing in one direction while withering in another. I found it completely compelling and believable, and admired it enormously.” —Philip Pullman

“Weird and disturbing, like any work of genius, this novel haunted me for the seven nights I spent reading it, and haunts me still. A story of faith that will mesmerize believers and non-believers alike, a story of love in the face of the Apocalypse, a story of humanity set in an alien world—The Book of Strange New Things is desperately beautiful, sad, and unforgettable.” —David Benioff

“Intriguing…both painful and compelling. And when you find out the answers to some of the novel's central mysteries . . . Well, I won't give anything away, but the answers pack a punch.”—Rick Riordan

Where the Sidewalk Ends Special Edition with 12 Extra Poems: Poems and Drawings (Hardcover)