The Night Ocean: A Novel (Paperback) 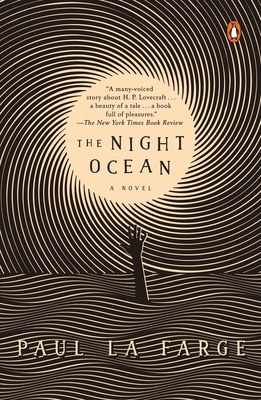 After publishing a controversial book on H.P. Lovecraft, Marina's husband has vanished from an asylum. In her increasingly maddening investigation, Marina descends deepter into two puzzles: what is TRUE horror, and how well can you really know someone? La Farge keeps the reader off balance with unreliable characters and narrative trapdoors but successfully builds suspense in his protagonist's real quest: finding her husband.

From the award-winning author and New Yorker contributor, a riveting novel about secrets and scandals,  psychiatry and pulp fiction, inspired by the lives of H.P. Lovecraft and his circle.

Marina Willett, M.D., has a problem. Her husband, Charlie, has become obsessed with H.P. Lovecraft, in particular with one episode in the legendary horror writer's life: In the summer of 1934, the "old gent" lived for two months with a gay teenage fan named Robert Barlow, at Barlow's family home in central Florida. What were the two of them up to? Were they friends--or something more? Just when Charlie thinks he's solved the puzzle, a new scandal erupts, and he disappears. The police say it's suicide. Marina is a psychiatrist, and she doesn't believe them.

A tour-de-force of storytelling, The Night Ocean follows the lives of some extraordinary people: Lovecraft, the most influential American horror writer of the 20th century, whose stories continue to win new acolytes, even as his racist views provoke new critics; Barlow, a seminal scholar of Mexican culture who killed himself after being blackmailed for his homosexuality (and who collaborated with Lovecraft on the beautiful story "The Night Ocean"); his student, future Beat writer William S. Burroughs; and L.C. Spinks, a kindly Canadian appliance salesman and science-fiction fan -- the only person who knows the origins of The Erotonomicon, purported to be the intimate diary of Lovecraft himself.

As a heartbroken Marina follows her missing husband's trail in an attempt to learn the truth, the novel moves across the decades and along the length of the continent, from a remote Ontario town, through New York and Florida to Mexico City. The Night Ocean is about love and deception -- about the way that stories earn our trust, and betray it.

Paul La Farge is the author of the novels The Artist of the Missing (1999), Haussmann, or the Distinction (2001), and Luminous Airplanes (2011), as well as The Facts of Winter (2005), a book of imaginary dreams. His stories and essays have appeared in The New Yorker, Harper's, The Believer, McSweeney's, Nautilus, Conjunctions and elsewhere. He has won the Bard Fiction Prize, two California Book Awards, and the Bay Area Book Critics' Award for fiction. In 2013-14 he was a fellow at the Dorothy and Lewis B. Cullman Center for Scholars and Writers at the New York Public Library. He has received fellowships from the National Endowment for the Arts, the Guggenheim Foundation, and the New York Foundation for the Arts.

“La Farge’s fourth novel is a playfully disorienting tour through the biography of the horror master H. P. Lovecraft, as well as a portrait of a number of men, both fictional and real, who try to decode his life and work…La Farge has great fun constructing texts with contradictory information about the young man, the most entertaining of which involves William S. Burroughs, the strangest Lovecraftian of all.”— The New Yorker

“I’ve always been too timid to read H. P. Lovecraft novels and to experience the eldritch wonders within, but I’m greatly enjoying Paul La Farge’s new novel, The Night Ocean, on Lovecraftian themes. Like Murakami, La Farge keeps a foot in the familiar while leading you on his eerie adventures.” –Sarah Larson, The New Yorker

“A beauty of a tale…A book full of pleasures…Dashing, playful and cleverly imagined, The Night Ocean emerges as an inexhaustible shaggy monster, part literary parody, part case study of the slipperiness of narrative and the seduction of a good story.”— D. T. Max, The New York Times Book Review

“A fascinating, labyrinthine story….La Farge treats readers to two equally compelling and dubious stories….a reminder that in spite of our best efforts, sometimes the truth really is beyond our comprehension.” —Boston Globe

“The plot unfolds like a series of Russian nesting dolls, and thrillingly so: Like the best of Lovecraft, this novel questions the capacity of language to describe reality with accuracy…The Night Ocean proves to be more than a great read—it’s a timely meditation on the challenge of separating artist from art and the limits of human understanding.” —Chicago Review of Books

“[La Farge] carries it all off with breathtaking skill and panache.…[S]pare yourself the trouble of trying to divine what’s true and what’s fiction in “The Night Ocean” and just go along for the ride.” –The Washington Post

“A breathtaking novel inspired by HP. .Lovecraft, this story takes fan fiction to new levels. It’s intricate, original, and a thrill of a read.”— Cosmopolitan (Best New Books for Spring)

“A complicated and beautiful demonstration of people trying to live and love in a world of unknowns….Powerful.” —BOMB


“With this intoxicating trip into the twin worlds of imagination and reality, La Farge gives new meaning to fan fiction in his exploration of the world of H.P. Lovecraft and the legacy he left behind.”  —Newsweek

“This is a formally and emotionally limber novel that pulls you in as a black lake might, except that it’s also funny, and transformative, and illuminating—it’s a book of spells if I’ve ever read one.” –Lit Hub

“[La Farge] has surpassed himself. The Night Ocean is the ultimate crossing of the hazy boundary between reality and fantasy….A mighty boon to horror geeks like me who misspent a good portion of our youths reading the pulp fiction of Lovecraft and his unholy minions.” –BookPage

“What a great book…Highly recommended but be prepared.” –The H.P. Lovecraft Historical Society

“Remarkable…The Night Ocean is a fabulous novel, in the quite literal meaning of that: it’s about tricksters and literary hoaxes and secret identities, but it’s really about the fables we make to construct, or discover, or invent ourselves, and about how much we can really get away with.” --Locus

“This many-layered literary mystery is chockablock with surprise appearances.” —BBC.com, “Ten Books You Should Read in March”

“As we traverse a shifting narrative web that spans continents, decades, and spiritual dimensions, La Farge’s inventive and absorbing fifth novel reveals that questions relating to love and horror are not always mutually exclusive.” —Chronogram


“The universe of The Night Ocean is vast....In a complex, high-concept narrative littered with famous figures, La Farge leaves readers ever uncertain as to who’s telling the truth—and ready for the next twist.”
—Elle

“Throughout, the novel wobbles between richly researched historical fact… and brilliantly imagined fiction. It will escape no reader that The Night Ocean is itself a work of passion, wordsmithery, and obsession — a kind of story within a story, if you will, of the sort that Lovecraft would have, well, loved.”
—The Week

“Was H.P. Lovecraft, the great American horror writer, gay? That’s the question at the start of this ingenious, provocative work of alternative history from La Farge …Like Lovecraft’s ‘The Call of Cthulhu,’ the novel consists of several sub-narratives, ranging widely in time and place. But instead of a revelation about humanity’s diminished place in an impersonal universe, La Farge delivers insights into the human need to believe in stories and the nature of literary fame, while consistently upsetting readers’ expectations….[H]e outdoes his predecessors with this crafty mix of love, sex, and lies.”
—Publishers Weekly, (starred review)

“The breadth of La Farge’s research and the specificity of his historical details are impressive: we enter the worlds of science-fiction fandom, internet trolls, literary hoaxes, and ancient Mexican civilizations as [he] deftly weaves in famous figures like H.P Lovecraft, Isaac Asimov, and William S. Burroughs. Only a virtuoso could pull off a story so intricately plotted and so full of big ideas about morality and truth…La Farge is this virtuoso, folding stories inside stories with ease…. An effortlessly memorable novel.”
—Kirkus Reviews (starred review)

"Magnificent. The Night Ocean is an impossible, irresistible novel, a love letter to the unloveable that speaks the unspeakable."
- Lev Grossman, author of the Magicians trilogy

“A whole damned hustling heart-broken double-talking meaning-haunted world it is a privilege to enter.”
– Peter Straub

“Paul La Farge has crafted the perfect novel – a work that constantly twists into unexpected realms, that illuminates the nature of love and deception, and that is as funny as it is profound. The Night Ocean is a gift to readers.”
- David Grann, author of The Lost City of Z

“The Night Ocean had me from the first sentence. This immensely original, elegantly written and continually surprising novel casts a spell that keeps us enthralled until the book's brilliant conclusion."
– Francine Prose, author of Lovers at the Chameleon Club, Paris 1932


"The best novel of the year, almost any year. Historical, hysterical, fanatically attuned to the nuances of language and character, its mission, in its own words, is to ‘begin the almost impossible work of loving the world.’ It succeeds and then some, but it does more than that. It opens the window and airs out our stuffy literature. It is a book of light and laughter."
- Gary Shteyngart, author of Super Sad True Love Story


"The Night Ocean is straight up brilliant. That's no surprise since it's written by Paul La Farge, one of the smartest, wildest literary talents in the game today….A sly, witty, but still loving send-up of H.P. Lovecraft and some of the grand anxieties of the American 20th century."
- Victor LaValle, author of The Ballad of Black Tom


“It has been years since I read a novel with so much joy, impatience and awe. The Night Ocean overflows with difficult love, not least of all that of our narrator, Marina, who indirectly reminds us of how we are pushed around by dreams, ghosts, chance, and history. I have long been a tremendous admirer of all of La Farge's work; this novel is my favorite.”
– Rivka Galchen, author of Atmospheric Disturbances

“An electric exploration of horror, obsession, madness, and mystery. A novel that tunnels deeper into the thorny caverns of the human heart than most dare. To read The Night Ocean is to be plunged under a scary smart, morally labyrinthine, and wickedly funny spell. Paul La Farge is one of the most exciting writers working today.”
– Laura van den Berg, author of Find Me