The British Are Coming: The War for America, Lexington to Princeton, 1775-1777 (The Revolution Trilogy #1) (Paperback) 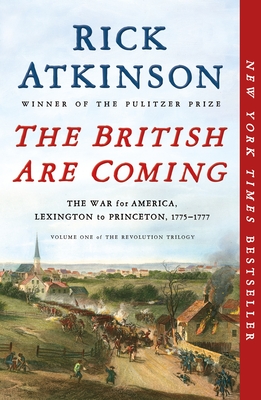 If you're a Revolutionary War buff, look no further than Book I of Atkinson's planned trilogy. He applies the same war journalist technique that won him a Pulitzer for An Army at Dawn. Rather than romantic, painterly odes, this is filled with nasty, gritty details and brings the smoke and shrapnel of the 1770s into your living room.

The paperback edition of the New York Times bestseller that the Wall Street Journal said was “chock full of momentous events and larger-than-life characters.”

Rick Atkinson, author of the Pulitzer Prize–winning An Army at Dawn and two other superb books about World War II, has long been admired for his deeply researched, stunningly vivid narrative histories. Now he turns his attention to a new war, and in the initial volume of the Revolution Trilogy he recounts the first twenty-one months of America’s violent war for independence.

From the battles at Lexington and Concord in spring 1775 to those at Trenton and Princeton in winter 1777, American militiamen and then the ragged Continental Army take on the world’s most formidable fighting force. It is a gripping saga alive with astonishing characters: Henry Knox, the former bookseller with an uncanny understanding of artillery; Nathanael Greene, the blue-eyed bumpkin who becomes a brilliant battle captain; Benjamin Franklin, the self-made man who proves to be the wiliest of diplomats; George Washington, the commander in chief who learns the difficult art of leadership when the war seems all but lost. The story is also told from the British perspective, making the mortal conflict between the redcoats and the rebels all the more compelling.

Full of riveting details and untold stories, The British Are Coming is a tale of heroes and knaves, of sacrifice and blunder, of redemption and profound suffering. Rick Atkinson has given stirring new life to the first act of our country’s creation drama.

Rick Atkinson is the bestselling author of the Liberation Trilogy—An Army at Dawn (winner of the Pulitzer Prize for History), The Day of Battle, and The Guns at Last Light—as well as The Long Gray Line and other books. His many additional awards include a Pulitzer Prize in journalism, a George Polk Award, and the Pritzker Military Library Literature Award. A former staff writer and senior editor at The Washington Post, he lives in Washington, D.C.

“To say that Atkinson can tell a story is like saying Sinatra can sing. . . . Historians of the American Revolution take note. Atkinson is coming. He brings with him a Tolstoyan view of war; that is, he presumes war can be understood only by recovering the experience of ordinary men and women caught in the crucible of orchestrated violence beyond their control or comprehension.” —Joseph J. Ellis, The New York Times Book Review

“[Atkinson has a] felicity for turning history into literature. . . . One lesson of The British Are Coming is the history-shaping power of individuals exercising their agency together: the volition of those who shouldered muskets in opposition to an empire. . . . The more that Americans are reminded by Atkinson and other supreme practitioners of the historians’ craft that their nation was not made by flimsy people, the less likely it is to be flimsy.” —George F. Will, The Washington Post

“Atkinson…wastes no time reminding us of his considerable narrative talents. . . . His knowledge of military affairs shines in his reading of the sources. . . . For sheer dramatic intensity, swinging from the American catastrophes at Quebec and Fort Washington to the resounding and surprising successes at Trenton and Princeton, all told in a way equally deeply informed about British planning and responses, there are few better places to turn.” —The Washington Post

“An epic tale, epically told. Atkinson excels at deftly summarizing personalities. . . . He moves effortlessly from the plans of commanders to the campfires of troops. The extraordinary scholarship involved—his meticulous endnotes cover 133 pages—is testament to a historian at the very top of his game…. The writing [is] incisive, humane, humorous, and often scintillating. . . . Anyone reading The British Are Coming will finish it looking forward impatiently to the next two. The trilogy looks fair to become the standard account of the war that brought the American Republic into being.” —Andrew Roberts, Claremont Review of Books

"The British Are Coming is an exquisite masterpiece of history by one of the nation’s foremost writers and historians. There is a newness, eloquence, and immediacy in Atkinson’s telling that surpasses any previous Revolutionary War narrative; it conveys to the reader a sense of discovering the American Revolution for the very first time, in all of its sheer drama. This volume embraces the lived experience of the war’s early years with all of its complexities, ironies, triumphs, and tragedies. . . . This volume is, in short, a work to be reckoned with and one that will powerfully inform broader conversations on the importance and continued relevance of our national origins." —Citation, 2020 George Washington Book Prize

"One of the best books written on the American War for Independence. . . . The reader finishes this volume uncertain of how either side can win this war, but very much wanting Atkinson to continue its telling." —Robert J. Allison, The Journal of Military History

“[Atkinson’s] account promises to be as detailed a military history of the war as we will see in our lifetimes upon its completion. . . . Atkinson makes good use of information from letters and journals to give his reader a sense of what it would have been like to walk in the shoes of both the war’s illustrious and lesser known participants. . . . Atkinson’s accounts of battles are among the most lucid I’ve read. . . . Readers who enjoy richly detailed military history will be greatly anticipating his second volume.” —Journal of the American Revolution

“Atkinson takes his time, but there's delight in all that detail. . . . Atkinson is a superb researcher, but more importantly a sublime writer. On occasion I reread sentences simply to feast on their elegance. . . . This is volume one of a planned trilogy. Atkinson will be a superb guide through the terrible years of killing ahead.” —The Times (London)

“The British Are Coming [is] a sweeping narrative which captures the spirit and the savagery of the times. Based on exhaustive research on both sides of the Atlantic, Atkinson displays a mastery of the English language as well as military tactics which puts him in a class of his own as a writer.” —Lionel Barber, Editor, Financial Times

“Rick Atkinson is emerging as America’s most talented military historian. . . . The British Are Coming is history written in a grand style and manner. It leaves one anxiously awaiting the next two volumes.” —New York Journal of Books

“Pulitzer Prize-winner Atkinson (The Liberation Trilogy) replicates his previous books’ success in this captivatingly granular look at the American Revolution from the increasing tension in the colonies in 1773 to the battles of Trenton and Princeton in 1777. Extensive research . . . allows Atkinson to recreate the past like few other popular historians . . . A superlative treatment of the period.” —Publishers Weekly (starred review)

“This balanced, elegantly written, and massively researched volume is the first in a projected trilogy about the Revolutionary War. . . . Combining apt quotation (largely from correspondence) with flowing and precise original language, Atkinson describes military encounters that, though often unbearably grim, are evoked in vivid and image-laden terms. . . . Aided by fine and numerous maps, this is superb military and diplomatic history and represents storytelling on a grand scale.” —Booklist (starred review)

“Atkinson (The Guns at Last Light, etc.) is a longtime master of the set piece: soldiers move into place, usually not quite understanding why, and are put into motion against each other to bloody result. . . . A sturdy, swift-moving contribution to the popular literature of the American Revolution.” —Kirkus (starred review)

“This book is, in a word, fantastic. It offers all the qualities that we have come to expect from the author: deep and wide research, vivid detail, a blend of voices from common soldiers to commanders, blazing characterizations of the leading personalities within the conflict and a narrative that flows like a good novel. . . . The British Are Coming is a superb ode to the grit and everyday heroism that eventually won the war.” —BookPage (starred review)

The House of the Spirits: A Novel (Paperback)