The Fields: A Novel (Hardcover) 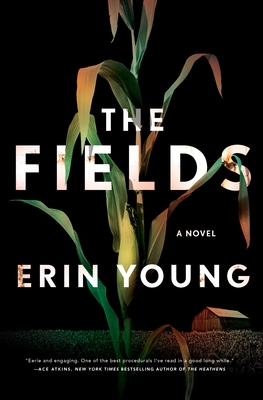 A brilliant and gripping American debut for a UK best-selling author and TV writer. Young expertly weaves multiple fascinating plotlines into one thrilling story with an ending you'll never see coming. For fans of Tana French--except it's Iowa instead of Ireland.

A breakneck procedural that is beautifully written and masterfully crafted, Erin Young's The Fields is a dynamite debut—crime fiction at its very finest.

It starts with a body—a young woman found dead in an Iowa cornfield, on one of the few family farms still managing to compete with the giants of Big Agriculture.

When Sergeant Riley Fisher, newly promoted to head of investigations for the Black Hawk County Sheriff’s Office, arrives on the scene, an already horrific crime becomes personal when she discovers the victim was a childhood friend, connected to a dark past she thought she’d left behind.

The Fields is Erin Young’s debut crime thriller, featuring Sergeant Riley Fisher of Black Hawk County, in the first of a planned series. Young lives and writes in Brighton, England.

"We all know the trope, or think we do: A 20-something woman is found dead in a cornfield, and the investigating officer recognizes the victim as a childhood friend. But just as surely as Mare of Easttown brilliantly tweaked the police procedural format, so does Erin Young in her lean-limbed, gripping new novel, the first in a series. Wisecracking, gimlet-eyed Sergeant Riley Fisher pursues a possible serial killer in an Iowa county caught between the ambitions of Big Agriculture and failing family farms. Young’s plot blazes outward like a prairie fire as the body count mounts and Riley’s own past surges into the present, testing her instincts in crime scene after crime scene, “shards of amber light sparking off waterways and wetlands, home to deer and turtles, beavers, and snakes.” —Oprah Daily

“Fast, smart and authentic. Riley Fisher is a bold new character on the crime scene, grounding this eerie and engaging thriller. The Fields is one of the best procedurals I’ve read in a good long while.” —Ace Atkins, New York Times bestselling author of The Heathens

"The Fields is my favorite sort of novel: the sharp prose and explosive plot immediately drew me in, but the richly textured exploration of life in rural America stayed with me long after I finished. I hope to see more of Sergeant Riley Fisher, the novel's dynamic female protagonist. This is a classic crime series in the making." —Cristina Alger, New York Times bestselling author of Girls Like Us

“This is superb. Dark, immersive and seriously gripping. Hints of True Detective & The Silence of the Lambs.” —Will Dean, author of The Last Thing to Burn

“What could be more all-American than a small town amid rolling fields of corn? But when a woman’s body is found in those same fields, the dark truth beneath that wholesome image begins to emerge.... From potential serial-killer investigation to high stakes political intrigue... The Fields is an impressive debut.” —Mystery & Suspense