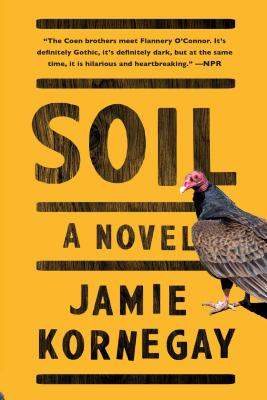 An aspiring & unlucky farmer discovers a corpse in his field...and rather than notifying the authorities, he makes a series of paranoid and increasingly ruinous decisions, putting himself on a collision course with a corrupt deputy and his own conscience. It's Dostoevsky told by the Coen Bros. under a hot Mississippi sun.

“In his debut novel, Kornegay has confidently announced himself as a writer to watch. Centered around Jay Mize, an idealistic farmer whose luck just keeps breaking bad, the story kicks into high gear when Jay discovers a corpse on his failing farm. Fearing he is being framed by his less progressive neighbors, Jay hides the discovery rather than reporting it. Kornegay expertly heightens the tension, tightening the screws on the increasingly paranoid Jay in a way that makes it impossible for the reader to put the book down. With Soil, Kornegay joins Wiley Cash and Tom Franklin as a strong voice in the world of Southern gothic fiction.”
— Josh Christie, Sherman's Book & Stationary, Bar Harbor, ME

It all begins with a simple dream. An ambitious young environmental scientist hopes to establish a sustainable farm on a small patch of land nestled among the Mississippi hills. Jay Mize convinces his wife Sandy to move their six-year-old son away from town and to a rich and lush parcel where Jacob could run free and Jay could pursue the dream of a new and progressive agriculture for the twenty-first century. Within a year he’d be ruined.

When the corpse appears on his family’s property, Jay is convinced he’s being set up. And so beings a journey into a maze of misperceptions and personal obsessions, as the farmer, his now-estranged wife, a predatory deputy, and a backwoods wanderer, all try to uphold a personal sense of honor. By turns hilarious and darkly disturbing, Soil traces one man’s apocalypse to its epic showdown in the Mississippi mudflats. “The Coen brothers meets Flannery O’Connor. It’s definitely Gothic, it’s definitely dark, but at the same time, it is hilarious and heartbreaking” (Kyle Jones, NPR).

Drawing on elements of classic Southern noir, dark comedy, and modern dysfunction, Jamie Kornegay’s novel is about the gravitational pull of one man’s apocalypse and the hope that maybe, just maybe, he can be reeled in from the brink. “Dig your hands into this Soil to find gutty and peppery writing, an almost recklessly bold imagination, audacious empathy, and a story so twisty and volatile that nearly every turn feels electrifyingly unexpected” (Jonathan Miles, award-winning author of Want Not and Dear American Airlines).

Jamie Kornegay lives in the Mississippi Delta, where he moved in 2006 to establish an independent bookstore, Turnrow Book Co. Before that he was a bookseller, events coordinator, and radio show producer at the famous Square Books in Oxford, Mississippi. He studied creative fiction under Barry Hannah at the University of Mississippi. Soil is his first novel.

“Let us stand, brothers and sisters, to applaud the arrival of an exquisitely deranged new voice to American fiction. Dig your hands into this Soil to find gutty and peppery writing, an almost recklessly bold imagination, audacious empathy, and a story so twisty and volatile that nearly every turn feels electrifyingly unexpected. This rough-n-tumble model of Southern literature—the vehicle of choice for the late greats Barry Hannah, Larry Brown, Harry Crews, and William Gay—has felt stalled on the roadside for several years now; Jamie Kornegay just pulled up with some big-ass jumper cables.”
—Jonathan Miles, author of Want Not and Dear American Airlines

"Jamie Kornegay's novel Soil heralds the arrival of an exciting new voice. This book is atmospheric 'as all get-out,' as my grandmother might have said, and it crackles with intensity. It's everything I want a novel to be, a fine story well-told with characters I won't forget, set in a world so real you can smell it and taste it. Kornegay's something special."
–Steve Yarbrough, author of The Realm of Last Chances

"Mississippi has done it again, given us yet another brilliant writer. Welcome, Jamie Kornegay, to a long line of kick-ass storytellers. Soil is one of the most memorable novels I've read in years, with a killer story told in killer language. Highly, highly recommended."
—Tom Franklin, author of Crooked Letter, Crooked Letter

“Jamie Kornegay's prose is as rich and fertile as the Mississippi Delta landscape that spreads across the pages of Soil. It is poetic, both in its language and in the soulful complexity of its characters, all of them fallen and trudging along the hard worn path of redemption on dirty hands and knees.”
—Michael F. Smith, author of Rivers

“Marked by wry humor, unforgettable characters, and riveting suspense, Jamie Kornegay’s Soil is a spellbinding Greek tragedy played out against the backdrop of the choked river-bottoms, sprawling fields, and dusty roads of the Mississippi Delta. A brilliant, haunting portrait of the havoc one desperate man’s decisions and dreams can wreak upon himself and those around him. This remarkable novel springs from rich earth indeed, and the end result is a book that will leave readers reeling.”
—Skip Horack, author of The Eden Hunter, and The Southern Cross

“A darkly droll, epic novel told in a style I’d have to call a deceptively swift amble through a most vividly rendered, watery Delta world. Anyone from Coleridge to Twain to Faulkner to William Gay would have loved reading this book, and you will, too.”
—Brad Watson, author of The Heaven of Mercury and Aliens in the Prime of Their Lives

"Jamie Kornegay's powerful debut novel, Soil, is just as rich, dark and primal as the title suggests and it is hard not to discuss the various characters' plights without slipping into metaphor as they both literally and figuratively dig and tunnel and turn up all that is buried. This novel is brimming with suspense while continuously locating the fine line separating good from evil. Just as the soil delivers all that is decomposed and lost, it also brings promise of future growth and in this case, it is in the form of the protagonist's son. Kornegay's rendering of hope and innocence against the backdrop of depravity and darkness is admirable and moving." —Jill McCorkle, New York Times bestselling author of Life after Life

"Kornegay imbues his characters with depth and his story with suspense, but the real star of the book is the pungent and foreboding Mississippi earth itself. A promising debut from an assured new voice in Southern fiction.”
—Library Journal

“Kornegay's keenly observed novel is a bit of a slow burner at first, but it soon builds into a page-turning crescendo and a suspense-filled finale which will make your heart pound and leave you opened-mouthed in horror.”
—Western Gazette

“This marvelous bookresembles the Southern Gothic novels of the past such as the classic EternalFire by Calder Willingham.”
—Smoky Mountain News