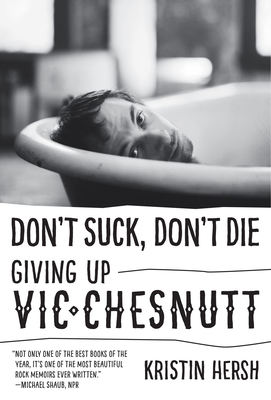 “Friend, asshole, angel, mutant,” singer-songwriter Vic Chesnutt “came along and made us gross and broken people seem . . . I dunno, cooler, I guess.” A quadriplegic who could play only simple chords on his guitar, Chesnutt recorded seventeen critically acclaimed albums before his death in 2009, including About to Choke, North Star Deserter, and At the Cut. In 2006, NPR placed him in the top five of the ten best living songwriters, along with Bob Dylan, Tom Waits, Paul McCartney, and Bruce Springsteen. Chesnutt’s songs have also been covered by many prominent artists, including Madonna, the Smashing Pumpkins, R.E.M., Sparklehorse, Fugazi, and Neutral Milk Hotel.

Kristin Hersh toured with Chesnutt for nearly a decade and they became close friends, bonding over a love of songwriting and mutual struggles with mental health. In Don’t Suck, Don’t Die, she describes many seemingly small moments they shared, their free-ranging conversations, and his tragic death. More memoir than biography, Hersh’s book plumbs the sources of Chesnutt’s pain and creativity more deeply than any conventional account of his life and recordings ever could. Chesnutt was difficult to understand and frequently difficult to be with, but, as Hersh reveals him, he was also wickedly funny and painfully perceptive. This intimate memoir is essential reading for anyone interested in the music or the artist.

Kristin Hersh is a founding member of the bands Throwing Muses and 50 Foot Wave. Her memoir Rat Girl was widely praised by publications from the New York Times to Rolling Stone, which named it one of the top ten best rock memoirs ever written.

Amanda Petrusich is the author of several books about music, including Do Not Sell At Any Price: The Wild, Obsessive Hunt for the World’s Rarest 78 rpm Records. Her criticism and reporting has appeared in the New York Times, the New York Times Magazine, Pitchfork, Spin, BuzzFeed, and the Oxford American, where she is a contributing editor. She teaches music writing at New York University.

The book's great sadness is matched by the skill and vitality of Hersh's writing; it will make treasured and troubled reading for fans of Chesnutt and the author alike.
— Kirkus Reviews

Don't Suck, Don't Die is not only one of the best books of the year, it's one of the most beautiful rock memoirs ever written. Hersh is as stunningly talented an author as she is a musician, and her portrayal of Chesnutt is perfectly done.
— NPR

A raw, poetic memoir . . . a last, wonderful example of Chesnutt at his most charismatically mischievous
— The Guardian

Hersh’s language is vivid and conversational, as descriptive and elliptical as her own music.
— Salon

In under 200 little pages, it paints a more honest, insightful picture of the late singer-songwriter than any biography could . . . Beautifully, poetically told.
— MOJO

A powerful and moving insight . . . A book that will move anyone who’s loved and lost, regardless of whether they’re a fan of the author of Chesnutt.
— R2

An intimate, complicated portrait of the artist as road warrior . . . a beautiful but often dark, heartbreaking read.
— Atlanta Journal-Constitution

An ode, an elegy and an examination of the physics of friendship.
— WABE 90.1 Atlanta

The music made by the late Vic Chesnutt was evocative, haunting and often heartbreaking. Kristin Hersh's book about the singer-songwriter shares all of these qualities . . . It's a book that gives a tremendous sense of what friendship with such a person was like, for good and for bad, and leaves the reader feeling his absence even more once the book has ended.
— Rolling Stone

It’s messy and spiky and unforgiving, crushingly sad, sometimes funny, and humane . . . I couldn’t speak for a while after finishing Hersh’s book.
— Inside Higher Ed

[I]n this haunting, poetic, musical road show memoir, singer/songwriter Kristin Hersh takes us inside her friendship with Chesnutt. Her experience is as insightful to a musician's life as it is to the human existence—constantly probing and reevaluating self-understanding along with her footing on the planet. . . . There are lines you'll never forget, and you can't help but love the adorable, self-sabotaging, curmudgeon Chesnutt revealed in these pages. You'll wish you'd been there to absorb his flak backstage or in the southern sun. On balance, this book stands as a testament to the sincerity of his songwriting.
— The US Review of Books

[A] piercing chronicle...Hersh uses vivid, engaging prose to capture Chesnutt’s complicated nature...Don’t Suck, Don’t Die is a moving portrait of an artistic genius—and a vulnerable manual on how to navigate immense grief after the death of someone we love.
— The A.V. Club, "The 15 most essential music bios (and autobiographies) so far this century"