Names on the Land: A Historical Account of Place-Naming in the United States (Paperback) 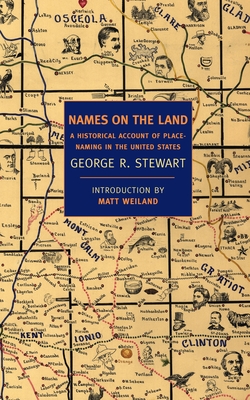 THE classic guide to American place names, now almost 80 years old and still indispensable for answering every question about Native American names that endured, stupid names invented by prospectors and congressmen, and exactly why Kansas and Arkansas don't sound the same.*

George R. Stewart’s classic study of place-naming in the United States was written during World War II as a tribute to the varied heritage of the nation’s peoples. More than half a century later, Names on the Land remains the authoritative source on its subject, while Stewart’s intimate knowledge of America and love of anecdote make his book a unique and delightful window on American history and social life.

Names on the Land is a fascinating and fantastically detailed panorama of language in action. Stewart opens with the first European names in what would later be the United States—Ponce de León’s flowery Florída, Cortés’s semi-mythical isle of California, and the red Rio Colorado—before going on to explore New England, New Amsterdam, and New Sweden, the French and the Russian legacies, and the unlikely contributions of everybody from border ruffians to Boston Brahmins. These lively pages examine where and why Indian names were likely to be retained; nineteenth-century fads that gave rise to dozens of Troys and Athens and to suburban Parksides, Brookmonts, and Woodcrest Manors; and deep and enduring mysteries such as why “Arkansas” is Arkansaw, except of course when it isn’t.

Names on the Land will engage anyone who has ever wondered at the curious names scattered across the American map. Stewart’s answer is always a story—one of the countless stories that lie behind the rich and strange diversity of the USA.

George R. Stewart (1895—1980) was born in Pennsylvania and educated at Princeton. He received his Ph.D. in English literature from Columbia University in 1922, and joined the English faculty at the University of California, Berkeley, in 1924. He was a toponymist, founding member of the American Name Society, and a prolific and highly successful writer of novels and of popular nonfiction, especially dealing with U.S. history and with the American West.

“A surprisingly terrifying short novel about children kidnapped by pirates, elevated from its silliness by surprising moments of violence and introspection, as well as repeated flourishes of literary brilliance. Also, it’s funny.” —Emily Temple, Lit Hub

"It chronicles the nomenclatural adventures of explorers, legislators, and common folk and amounts to a fizzy refresher on America's past and her character. It proceeds in a spruce voice that's a model for producing scholarship that doesn't feel leaden, and it further inspires meditations on tricks of rhetoric and laws of euphony...Perhaps most importantly, it is an aid to fighting tedium: You are about to have several hundred conversations touching on the matter of where your interlocutor is from, and Steward gives you a map for navigating this chatter with a bit of style." --Troy Patterson, Slate

"George R. Stewart, midcentury novelist and co-founder of the American Name Society, gave onomastics a good name with his classic Names on the Land (1945), a learned and rollicking act of patriotic toponymy. Its republication, with a graceful introduction by Matt Weiland, is a welcome reminder that the polyglot medley on our maps is, as Mr. Stewart says, 'a chief glory of our heritage'...few authors or books are more American--in every good sense of that word -- than George R. Stewart and Names on the Land." --Wall Street Journal

"Stewart's impressive research demonstrates exactly what is in a name." --The Pittsburgh Tribune-Review

"If the United States is the greatest poem, as Whitman once wrote, then surely the Rand-McNally Road Atlas is our national CliffsNotes. Google Maps are dandy, but there’s nothing like pulling the old coverless atlas off the shelf and pondering a green-dotted scenic route between two unvisited and evocatively named points. It’s too late to plan a summer road trip, but lately I’ve been supplementing my insomniac atlas-reading with George R. Stewart’s Names on the Land: A Historical Account of Place-Naming in the United States.” --Jennifer Schuessler, The New York Times Papercuts blog

"Names on the Land was first published in 1945 and has remained a classic in the field of onomastics--the study of proper names and their meanings." --Los Angeles Times

"You've likely heard me before on the lost-classic glories of New York Review Books, and this is a reprint of a typically idiosyncratic and cult-beloved World War II-era reference about just what the title says." --OMNIVORACIOUS at Amazon.com

"Unusual and excellent...put together in a fascinating manner...The style is also enchanting and leaves an impression that is not quickly forgotten...Here is a book, in short, that may be read frontwards or backwards or from the middle in either direction and be fully enjoyed." -American Speech

"As fascinating as the details are the fine accounts of periods and trends: the Royal names of colonial times, the names of heroes of the Revolution, abstract names and the Civil War...Indian names, French names, Spanish names, name-giving by Congress, name-giving by explorers and pioneers, by land-speculators, by railroaders, by rich men, poor men, beggar men, all acting according to the spirit of their times in this wonderful land of accelerated history." -American Literature.

"The result of careful research into an absorbing narrative...Interest of Americans in American geographical names as a subject for research is at least as old as our history as a republic." -Geographical Review

Encyclopedic in scope, "this book with its satisfactory index will be used as a dictionary. And the disappointment of occasionally not finding what one seeks will be assuaged by the illuminating charm of this remarkable key to our history, our language, our society."

"A book so interestingly and delightfully written is certain to have wide appeal...Like all really good books, regardless of subject, it has light to cast: something of which there seems to be never enough to go around." -Journal of American Folkore