The Burning of the World: A Memoir of 1914 (Paperback) 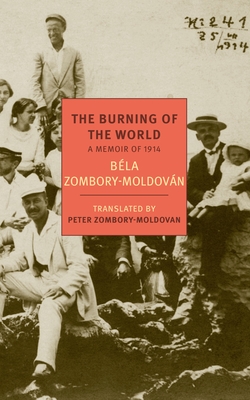 Publishing during the 100th Anniversary of the First World War

The budding young Hungarian artist Béla Zombory-Moldován was on holiday when the First World War broke out in July 1914. Called up by the army, he soon found himself hundreds of miles away, advancing on Russian lines and facing relentless rifle and artillery fire. Badly wounded, he returned to normal life, which now struck him as unspeakably strange. He had witnessed, he realized, the end of a way of life, of a whole world.

Published here for the first time in any language, this extraordinary reminiscence is a powerful addition to the literature of the war that defined the shape of the twentieth century.

Béla Zombory-Moldován (1885–1967) was born in Munkács (now Mukachevo), in what was then the Kingdom of Hungary, part of the Austro-Hungarian Empire. After graduating from the Academy of Fine Arts in Budapest, he established himself as a painter, illustrator, and graphic artist. Wounded in action in 1914 as a junior officer on the eastern front, he served the rest of the First World War in non-combatant duties. He was a successful painter, especially of portraits, during the interwar years, and was the principal of the Budapest School of Applied Arts from 1935 until his dismissal by the Communist regime in 1946. Out of official favor and artistic fashion in the postwar years, he devoted himself to the quiet landscapes in oils and watercolor that are his finest work. The writing of his recently discovered memoirs probably also dates from those years of seclusion.

Peter Zombory-Moldovan has co-translated Arthur Schnitzler’s Reigen and is working on a new version of Bertolt Brecht’s Furcht und Elend des Dritten Reiches for the English stage. A grandson of Béla Zombory-Moldován, he lives in London.

“The literary discovery of the year.” —Eileen Battersby, "Books of 2014"

“A remarkable narrative, a real treasure, a book everyone should read. The Burning of the World is a work of superb reportage as well as being a non-fiction companion volume to Joseph Roth’s classic The Radetzky March … The Burning of the World is a marvellous discovery with a humility and sense of wonder that places it more than the equal of even Robert Graves’s Good-Bye to All That.” —The Irish Times

“[W]ritten with a painter’s eye for colour … [it] matters not only for its literary qualities but also as an evocation of the Austro-Russian theatre (for which we have very few accounts) during the more mobile opening phase of campaigning, when casualty rates were among the highest of the war. … [a] story not only of madness and massacre but also of regeneration.” —David Stevenson, The Financial Times

“To a certain extent, World War I memoirs written from the ant’s perspective resemble one another, all mud and horror. What makes this one stand out is the author’s painterly eye for detail, his ability to evoke a vanished way of life, and his tone of voice—gentle and civilized but perfectly capable of the occasional sardonic flash.” —Henrik Bering, The Wall Street Journal

“The pages devoted to the subject [of combat] are brilliant…The strength of this book is as an account [of] the effect of war on one sensitive young man and on everything and everybody.” —Charles Moore, The Daily Telegraph

“To be in a war, within it, to know what that means, to  understand the appalling and dreadful significance of all that is appalling and dreadful—such was the fate of this gentle Hungarian painter. This book is perilous reading: the reader is invited, along with the writer, the one who remembers, to take part in what happened. But this is what we must do: from sympathy, from compassion, so that the one who truly lived through all of this will not be so utterly, unbearably alone.” —László Krasznahorkai

“One reads with never-ending curiosity and ever deeper emotion these recollections of the first year of World War I on the nearly forgotten eastern front. Here, instead of trenches, there was constant movement. Vast ill-equipped and ill-trained armies composed of multiple nationalities—among them Russians, Cossacks, Caucasians, Asians, Austro-Germans and Reich Germans, Hungarians, Romanians, Poles, Czechs, Slovaks, Croats, Serbs, and Slovenes—massacred each other for causes that few involved could understand.” —István Deák, Columbia University

"The writing detailing the author's experiences in battle has an energy and sense of urgency, and the whole book is filled with the understanding that life would never be the same again...recommended for anyone interested in World War I, war memoirs, and the history of eastern Europe." —Library Journal

"...haunting, heartbreaking, and beautifully written...[Zombory-Moldovan's] relatively short exposure to combat is conveyed with an unforgettable intensity. But this is not another chronicle of trench warfare....This is a deeply moving account of a young man's short but terrible plunge into an inferno." —Booklist, starred review

“The Burning of the World is a compact self-portrait against a background of carnage and disillusionment.” —Larry Rohter, The New York Times