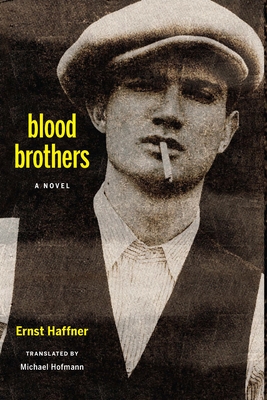 Written in 1932 and banned by the ascendant Nazi party one year later, this lean, lightning-paced novel is the only known work by German social worker Haffner, who "disappeared" during WW2. The prose is all tight muscle and bone, just like its title characters: teenage boys skulking the alleys of interwar Berlin escaping police and welfare boards. (*first ever translation into English)

Originally published in 1932 and banned by the Nazis one year later, Blood Brothers follows a gang of young boys bound together by unwritten rules and mutual loyalty.

Blood Brothers is the only known novel by German social worker and journalist Ernst Haffner, of whom nearly all traces were lost during the course of World War II. Told in stark, unsparing detail, Haffner’s story delves into the illicit underworld of Berlin on the eve of Hitler’s rise to power, describing how these blood brothers move from one petty crime to the next, spending their nights in underground bars and makeshift hostels, struggling together to survive the harsh realities of gang life, and finding in one another the legitimacy denied them by society.

Ernst Haffner was a journalist and social worker and his only known novel, Blood Brothers, was published to wide acclaim in 1932 before it was banned by the Nazis one year later. In the 1940s, all records of Haffner disappeared. His fate during World War II remains unknown.

Michael Hofmann has translated the work of Franz Kafka, Joseph Roth, Hans Fallada, and many others. In 2012 he was awarded the Thornton Wilder Prize for Translation by the American Academy of Arts and Letters. He is the author of several books of poems and essays, including Where Have You Been? (2014). He lives in Florida and London.

“Haffner’s project is journalistic, to portray destitution and criminality without the false sparkle of glamour—though Berlin is not half as boring as he (coyly) claims. The author was a social worker and a journalist, and his skill in portraiture and the depiction of a social milieu is evident… The characters are engaging, and multidimensional. You care what happens to them.” —The Wall Street Journal

"Blood Brothers is a remarkable portrait, a lively, heartbreaking close-up, of the scrappy desperate lives of Berlin’s homeless teenage boys in 1932.  It deserves to sit on the shelf next to Christopher Isherwood’s classic I Am A Camera which inspired the stage and film musical Cabaret...When you finish, you’ll be haunted." —The Boston Herald Hollywood & Mine Blog

"[W]hat an accomplished book...Haffner’s novel would be compelling enough for the fact that it presents readers with unique insights into daily life during the final days of the Weimar Republic, but it’s his bold insistence on presenting his subject’s lives in such a matter-of-fact way that makes Blood Brothers truly standout as an interesting, valuable piece of unforgettable literature." —Typographical Era

"[B]rilliantly translated into English by Michael Hofmann...Blood Brothers shocks because of its relevance to too much of the world we observe around us today." —CounterPunch.org

"Blood Brothers remains relevant to us today. [Haffner's] novel remains, salvaged from the wreckage of history, insistent in its message that all our endless, merciless cities—and towns and suburbs and wherever else our desperate lives play out—are too much for anyone on their own." —Words Without Borders

"[R]emarkable...Blood Brothers is an enthralling and significant novel, authentic in its gritty documentary detail, dispassionate yet empathic in its characterisation and starkly objective in its portrayal of Berlin’s pre-Nazi social underbelly." —Financial Times

“To the small library of classic novels about Berlin before Hitler by the likes of Erich Kästner, Alfred Döblin and Christopher Isherwood we now belatedly welcome Haffner's. Blood Brothers delivers an unflinching yet deeply affecting portrait of life on Berlin's darkest and most desperate streets. Hofmann's translation beautifully captures Haffner's muscular, hardboiled prose.” —Lawrence Douglas, Amherst College, author of The Memory of Judgment and The Vices

"The story reveals the illicit, dark and disturbing underworld of Berlin on the eve of Hitler’s rise to power...This is an important and unflinching classic in the making." —Susan Jaffe, Creative Director, Thurber House

“Haffner’s book stands out for its documentary detail. It opens with a description of the hours-long queues at the labor exchange, and paints a vivid picture of the gang’s initiation ceremonies, drinking rituals, and the glorious satisfaction of hot pea soup on an empty stomach. At the same time, Blood Brothers is plot-driven and told in a simple, straightforward, style.” —The Guardian

"Like a karate chop: hard and direct, but true." —Der Spiegel