In The Pines (Hardcover) 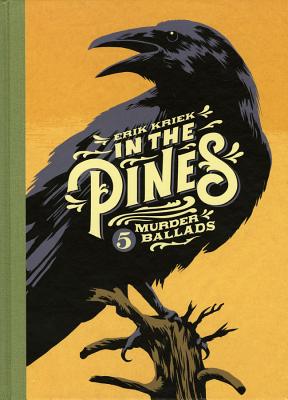 A Dutch cartoonist adapts five murder ballads — some of which have been covered by modern masters like Nick Cave, Steve Earle, and Gillian Welch — into ruthless graphic narratives.

A collection of murder ballads — some of which have been covered by modern masters like Nick Cave, Steve Earle, and Gillian Welch — that have been adapted into ruthless graphic narratives.

Erik Kriek is a cartoonist from Amsterdam. He is best known for his Gutsman comics, for which he won the Dutch award Stripschaprijis in 2008. He lives in the Netherlands with his girlfriend and son.

Kriek’s inky drawings fit the dark tone of these harsh tales of homicides, self-defense killings, and unjust executions. In no cases do Kriek’s variants displace the song, but they possess their own moody emotional power.
— Booklist

With relatively straightforward storytelling and simple, yet effective reveals that often render the murderer the most sympathetic character, Kriek's chapters are perfect realizations of these ballads. A quick but lingering read, In the Pines deserves to be appreciated with its source music echoing hauntingly in the background.

Where the Sidewalk Ends Special Edition with 12 Extra Poems: Poems and Drawings (Hardcover)