Bob Walsh - ENTITLED TO NOTHING 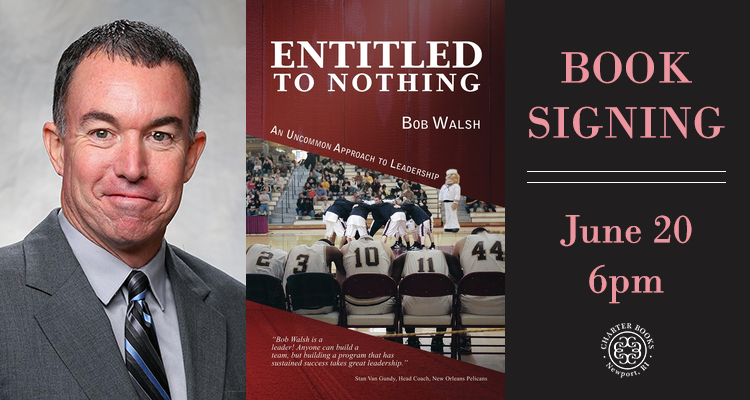 Providence College Men's Basketball Director of Player Development Bob Walsh joins us on June 20 at 6pm for a special signing of his book Entitled to Nothing, an inside look at championship culture based on Bob's triumphant run as head basketball coach at Rhode Island College. Bob lives in Newport and he's an avid supporter of our store, so we're excited to host him for this evening event.

While this event is free and open to all, we kindly ask that you fill out the RSVP form at the bottom of this page so we can plan accordingly.

Entitled to Nothing is an inside look at a championship culture built with an uncommon approach to leadership. Bob Walsh joined forces with a team of tough, hungry young men to create a level of ownership that led to sustained, elite success. Together they discovered an experience inside a demanding culture that did more than just win basketball games. It had a transformational impact on their lives.

In September of 2005, Rhode Island College, a division III state school in Providence, RI, hired their third men's basketball coach in as many years. Bob Walsh, a respected Providence College assistant, took over a program at a commuter school with no real identity or history of basketball success. Nine years later Walsh had built a national power, known for their toughness and competitive edge. The Anchormen won 204 games over those nine seasons, including 11 conference regular season and tournament titles. Without an NCAA appearance in nearly 30 years, RIC became one of just five teams in America to play in eight straight NCAA Tournaments, including three trips to the Sweet Sixteen and one magical run to the Elite Eight.

Entitled to Nothing provides unfettered access to Walsh's transparent style and the leadership lessons applied throughout a championship journey. Along the way, he asked questions that challenged standard group think and the traditional leadership model, leading to new thought processes and behaviors. Walsh offers an inside look at a game plan for sustained success, one that translates to elite performance in any organization focused on team building. Entitled to Nothing will encourage you to discover and refine your own unique leadership approach.

Bob Walsh returned to Providence College to work for Head Coach Ed Cooley in 2019. The 2019-20 season marked his first season with the Friars overseeing the development, scouting and recruiting efforts for the men’s basketball program. It is his second stint at Providence as he served as an assistant coach for the Friars from 1998-05.

Walsh came to Head Coach Ed Cooley’s staff with significant experience. He served as a head coach at the University of Maine from 2014-18.  Prior to coaching at Maine, Walsh was the head coach at Rhode Island College for nine seasons (2005-14). In his 13 years as a head coach, Walsh posted a 228-163 mark (.583), including a 137-79 record (.634) in conference play. He guided Rhode Island College to eight NCAA Tournament appearances, which included three Sweet 16s and one Elite 8.

Walsh began his career as a graduate assistant with the Iona College men’s basketball team in 1994. After working for two seasons with the Gaels, he spent one season at the University of San Diego as an assistant coach (1997-98). Walsh then was hired as an assistant coach under Friar Head Coach Tim Welsh in 1998. As an assistant at Providence, he helped guide the Friars to the NCAA Tournament in 2001 and 2004. He also helped mentor Friar all-time leading scorer Ryan Gomes.

A 1994 graduate of Hamilton College, Walsh lives in Newport, R.I. with his wife, Alicia.

Entitled to Nothing (Large Print / Paperback)