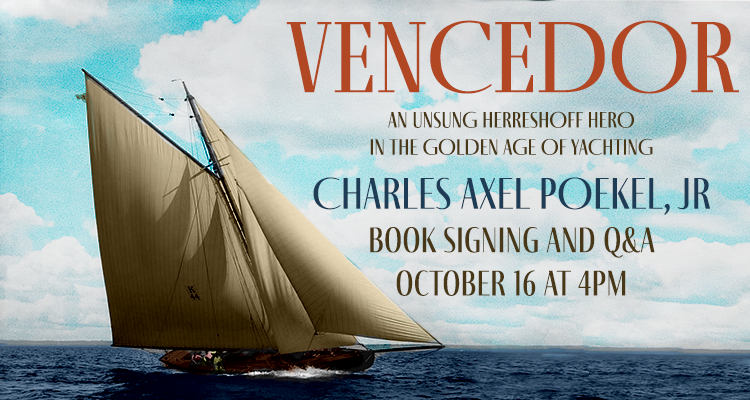 Charles A. Poekel, Jr. signs books and chats about his new book VENCEDOR: The Story of a Great Yacht and an Unsung Herreshoff Hero in the Golden Age of Yachting. Charles is the great-grandson of Herreshoff engineer and designer Thorvald S. Poekel, who designed the great racing yacht Vencedor but may have had a hand in several other vessels from the golden age of yachting.

This event is free and open to all. We are currently requiring masks of all staff and customers.

Impeccably researched and colorfully told, VENCEDOR is a fascinating account of not just a racing sailboat storied for its exploits and victories, but of the man who built it—a young 33 year-old Danish-American naval engineer, Thorvald S. Poekel. Vencedor would distinguish itself in a series of highly completive races between the United States and Canada on what was called “the great unsalted sea” – the Great Lakes.

In this magnetic and revealing account of a bygone era and the heated competition lies subtext of a question the author, Thorvald Poekel’s great-grandson, has long wondered about.

During his tenure with Herreshoff, the company made some of the fastest and most famous yachts in the world. Although Herreshoff signed almost all plans, the name of T. S. Poekel appears on several. The Chicago Tribune and newspapers in Racine reported that Mr. Poekel had been the real designer of the Defender, Niagara, and Vigilant.

VENCEDOR examines the question: Did he or didn’t he? 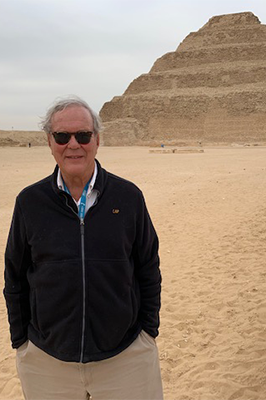 Charles Axel Poekel Jr. is a graduate of the George Washington University and Washington College of Law of American University. He is a former member of the New Jersey State Historical Commission and is Chairman of the Elisha Kent Kane Historical Society of New York City. He is a member of the Maritime Society of America and the Association of Yachting Historians His other books are WEST ESSEX and BABE & THE KID: The Legendary Story of Babe Ruth and Johnny Sylvester. Together with his wife Lynn and flame point Himalayan, Mr. Whiskers, he spends his time between New York City, Marion, Massachusetts, and Palm Beach, Florida. He is the great-grandson of Thorvald Julius Schougaard Poekel.

Vencedor: The Story of a Great Yacht and of an Unsung Herreshoff Hero in the Golden Age of Yachting (Hardcover)

Redwall: A Tale from Redwall (Paperback)