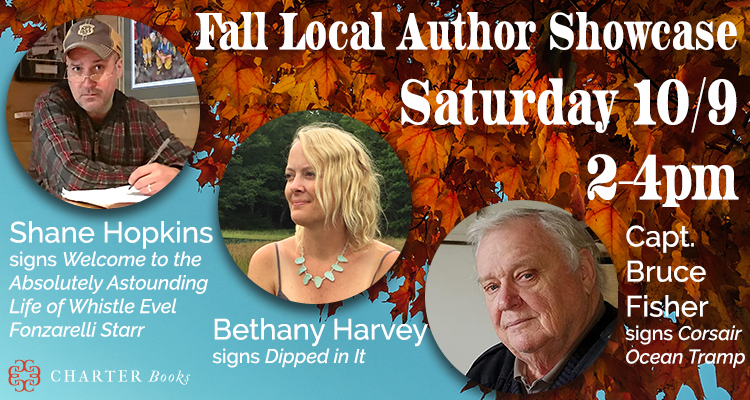 Charter Books presents three local writers whose bestselling books have received plenty of attention on the island this year. Each author will be present on Saturday afternoon, October 9th, from 2-4pm to sign copies and speak with customers about their books. Books will be available for sale but pre-orders are encouraged.

Shane Joseph Hopkins (Welcome to the Absolutely Astounding Life of Whistle Evel Fonzarelli Starr) is a 23 year veteran on the Newport, Rhode Island fire department, and an E.M.T for the last 28 years. Before that, Shane served his time in the military during "not so friendly times." After his tour of duty, he was honorably discharged from the United States Navy. He now lives with his wife Lisa in their log cabin surrounded by plenty of woods and wildlife. They have two grown children, Kelcey Read, and Dryden Peter. They also enjoy five crazy grandkids, Catalina May, Dryden Shane, Nadia Read, Delilah Rayne, and last but not least, Mabel Lily. This is Shane's first novel to be published, but definitely not his last...

Bethany Harvey (Dipped in It) lives in Rhode Island with her two wise and wonderful daughters, two cats, and a Labrador who is blessed with both an insatiable appetite and a wildly indiscriminate palate. She is the owner of Bloom, a highly sought-after, nature inspired preschool and childcare center. Having been dubbed “Sunshine” as a child, Bethany always thought her gift to the world was in maintaining a sunny disposition, no matter what. Dipped In It was born through with the recognition that allowing ourselves to feel the full spectrum of human emotion (even the uncomfortable parts) is what keeps us alive and connected as human beings.

Dipped In It: A Memoir (Paperback)