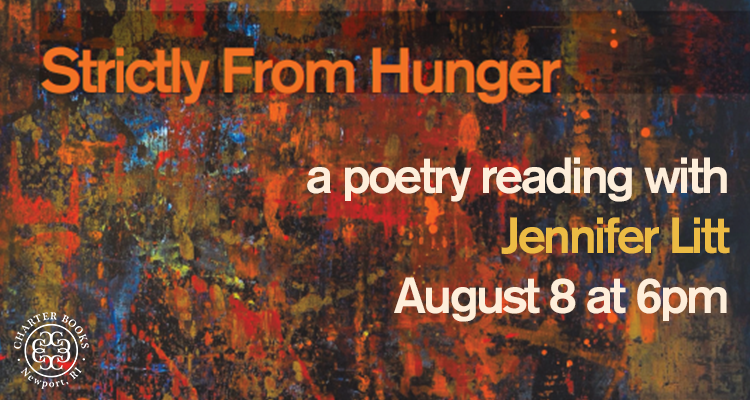 Educator and Tiverton native Jennifer Litt presents her poetry collection Strictly From Hunger, a powerful debut featuring a voice that is at once playful and fearless. Reading followed by Q&A and signing.

Strictly From Hunger by Jennifer Litt is a powerful debut collection by a poet who has spent decades mastering a diverse set of literary skills, including writing fiction, poetry, teaching and consulting.

What Others Say About Strictly From Hunger

There are many ways to arrive at that ineffable moment of language we call poetry. For Jennifer Litt, and her poems in Strictly from Hunger, that path is through sober, clear-eyed recollection and an astute slant upon what initially seems transparent observation. "Once you remove / the lid," Litt says in "OXO"—a poem where "Lovers, like fish, start to smell"—"you can't return the contents to the can." Litt's poems interrogate memory and desire to resist allusions that prevent a full embrace of the world before us. Part of that embrace encompasses a wry lyric sensibility: ("My father swept my mother / off her feet. She must have liked / his sand …"); other times, she lets us revel in sheer bawdiness, such as in "Mother Superior Gets Porked Again." Wherever her curious, generous voice leads us, the poems we are left with crackle with a quiet flame that signals "the difference between a real blaze & a false alarm."

Strictly from Hunger is a poetry collection that remembers a life well spent. These poems reach into early memories and reflect on dreams dared, mistakes made, and desires pursued through the years. Snapshots of first jobs and first loves mature into snapshots of a marriage ended and a marriage begun, before shifting to last moments with loved ones. Jennifer Litt deftly weaves nostalgia together with exuberance for the small ecstasies of being alive, illuminating the wisdom of embracing the present with an eye to both the past and the future.

Early in these exquisite poems, a pensive factory worker catches her thumb in a machine and ends up in the ER, though her sister accuses her of doing it on purpose to duck work. Later, the same woman works as a waitress in a French restaurant and pours water on a customer because she's daydreaming about Paris. But isn't that what poetry is? We already have this world, so why not have another? It's that dream world we live for, and it's poets as keen-eyed and open-hearted as Jennifer Litt who give it to us.

In this impressive debut collection, Jennifer Litt negotiates the space between humor and heartbreak in lyric lines that scald even as they soothe. "I mastered the self-fillet: served / up as whole with head intact to those / who would devour me," the speaker declares in an early poem. There are rougher seas ahead—parents age and die, a marriage ends, a romance blooms and withers—and still the speaker swims on, negotiating the tricky balance between desire and loss, "a hunger unrelated to food." Dig in, please: A feast awaits you. 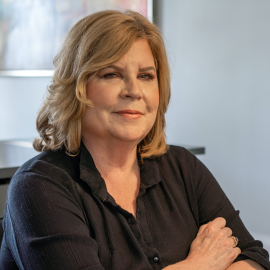 After graduating from the University of Rhode Island with a BA in English, I moved to London, England, to work as an au pair for the three children of two journalist parents and to absorb the culture. It was a year of surprises: a British ambassador's daughter added to the mix; earning a Diploma of Chelsea College (MA equivalent) in Modern Social and Cultural Studies, and enduring an attack by kittiwakes and guillemots while taking a boat tour with the Royal Bird Watching Society. After returning to the States and earning my secondary teaching certification, I taught high school English in Miami, Florida, and then adult literacy in Rochester, New York, where obtaining Education-through-the-Arts grants and facilitating collaborative literary/literacy projects with other community organizations became my focus.

My mother died less than a month after I turned 50. That year I ran my one and only marathon on Mount Desert Island, Maine, cheered on my son when he rowed for Cornell at Henley-on-Thames, worked as an adjunct writing instructor at several area colleges, and established a writing services business. Cobbling together a living was both freeing and frightening, but it did give me time to write—with poetry gradually edging out fiction. To be closer to my family, I relocated to Fort Lauderdale. Writing and revising Strictly from Hunger has taken me several years, but I've enjoyed all aspects of this undertaking. I look forward to new adventures.