The Playboy of the Western World and Other Plays: Riders to the Sea; The Shadow of the Glen; The Tinker's Wedding; The Well of the Saints; The Playboy (Oxford World's Classics) (Paperback) 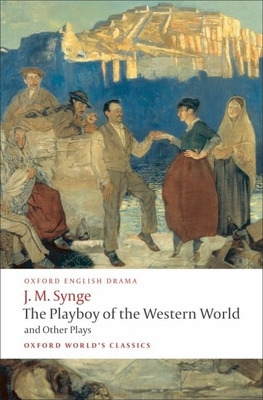 Few plays havev had as dramatic ;) an impact on their contemporary societies as this -- which incited riots at its Dublin premir in 1907. The resulting social unrest led to the Easter Rising. 9 years later and civil war after that. To read it (or see it) now is to take a glimpse at a nation barreling toward its crossroads.

Synge was one of the key dramatists in the flourishing world of Irish literature at the turn of the century. This volume offers every one of his plays, which range from racy comedy to stark tragedy, all sharing a memorable lyricism. The introduction to this new, definitive edition sets the plays in the context of the Irish literary movement, with special attention to Synge's role as one of the founders of the Abbey Theatre and his work alongside W.B. Yeats and Lady Gregory. About the Series: For over 100 years Oxford World's Classics has made available the broadest spectrum of literature from around the globe. Each affordable volume reflects Oxford's commitment to scholarship, providing the most accurate text plus a wealth of other valuable features, including expert introductions by leading authorities, voluminous notes to clarify the text, up-to-date bibliographies for further study, and much more.