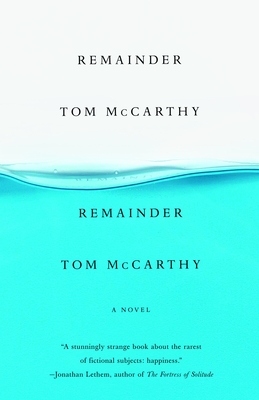 Our narrator is recovering from a mysterious traumatic head injury when he sees a crack in the wall at a house party. From this epiphanic experience, he sets out to recreate every aspect of that vision until his zeal for control threatens to upend reality. This is for anyone fascinated or freaked out by Nathan Fielder's The Rehearsal.

A man is severely injured in a mysterious accident, receives an outrageous sum in legal compensation, and has no idea what to do with it.

Then, one night, an ordinary sight sets off a series of bizarre visions he can’t quite place.

How he goes about bringing his visions to life–and what happens afterward–makes for one of the most riveting, complex, and unusual novels in recent memory.

Remainder is about the secret world each of us harbors within, and what might happen if we were granted the power to make it real.

Tom McCarthy was born in 1969 and lives in London. He is known for the reports, manifestos, and media interventions he has made as General Secretary of the International Necronautical Society (INS), a semi-fictitious avant-garde network. Remainder is his first novel.

“Hypnotically creepy . . . McCarthy’s portrait of the pursuit of total control is arresting, and he is alert to the bland amorality that underlies it.” —The New Yorker

“What fun it is when a crafty writer plays cat and mouse with your mind, when you can never anticipate his next move and when, in any case, he knows all the exits to the maze and has already blocked them. . . . McCarthy’s superb stylistic control and uncanny imagination transport this novel beyond the borders of science fiction. His bleak humor, hauntingly affectless narrator and methodical expansion on his theme make Remainder more than an entertaining brain-teaser: it’s a work of novelistic philosophy, as disturbing as it is funny.” —The New York Times Book Review

“A chillingly clever novel of patterns that fools you into thinking it’s a novel about plot . . . [McCarthy] is a new author who’s ambitious and intelligent.” —San Francisco Chronicle

“A novel of astonishing genius. . . . . It demands to be read in one sitting. So deftly does McCarthy absorb you into the mind of his hero that you quickly feel you are living with him inside his head. . . . The book caught me in such a delirious spin toward fragmentation and left me feeling every detail of the matter of life more keenly.” —Sarah Cook, The Believer

“Tom McCarthy is shockingly talented. . . . Remainder is one of those novels that you finish and turn immediately back to the beginning, to fill in the gaps you may have missed the first time around. It leaves you feeling sort of shaken and very impressed.” —Gawker.com

“Captivating and challenging. . . . Remainder isn't a mystery novel—there's no villain here apart from time and space—so if its core ripples with ambiguity, all the better for the reader, as this is a book to be read and then reread, rich as it is with its insights, daring as it is with its contradictions.” —Los Angeles Times

“The nameless narrator in this eerie debut is a Londoner severely injured in an accident. Months later, he received an £8.5 million settlement on the condition that he never speak about the payout or the incident again—not a problem, since he doesn’t remember it. Our hero then begins to wholly recreate and re-enact portions of his old life with a salaried cast of extras, set designers, and stuntmen. In taut and chilly prose, McCarthy describes how this mission becomes a disturbing obsession; the horrifying conclusion is visible 30 pages off, but it’s no less shocking when it arrives.” —Entertainment Weekly, A-

“A quick and gritty novel that begs, thanks largely to a cinematic plot, to be read in one sitting.” —BookSlut

“A stunningly strange book about the rarest of fictional subjects, happiness.” —Jonathan Lethem, author of The Fortress of Solitude

“Remainder is a beautifully strange and chilly book. Very smart and unlike anything else you're likely to read.” —Scott Smith, author of The Ruins

“Tom McCarthy has a singularity, a precision, a surreal logic and a sly wit that is all his own. It will be a long time before you read a stranger book—or a truer one.” —Rupert Thomson, author of Divided Kingdom

“It will remain with you long after you have felt compelled to re-read it.” —Time Out London

“Strangely gripping. . . . Remainder should be read (and, of course, reread) for its intelligence and humour.”
—The Times Literary Supplement (London)

Julián Is a Mermaid (Hardcover)