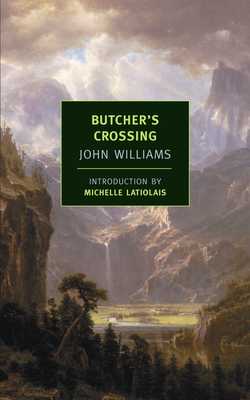 I call this the American Heart of Darkness. It;s the 1850s and an idealistic New Englander strikes out West to experience the frontier. He tags along on a buffalo hunt in the Rockies. The team discovers Eden, but it quickly becomes Hell. This anti-Western is lucid, brisk, thrilling, and perfefctly written.

It is the 1870s, and Will Andrews, ﬁred up by Emerson to seek “an original relation to nature,” drops out of Harvard and heads west. He washes up in Butcher’s Crossing, a small Kansas town on the outskirts of nowhere. Butcher’s Crossing is full of restless men looking for ways to make money and ways to waste it. Before long Andrews strikes up a friendship with one of them, a man who regales Andrews with tales of immense herds of buffalo, ready for the taking, hidden away in a beautiful valley deep in the Colorado Rockies. He convinces Andrews to join in an expedition to track the animals down. The journey out is grueling, but at the end is a place of paradisal richness. Once there, however, the three men abandon themselves to an orgy of slaughter, so caught up in killing buffalo that they lose all sense of time. Winter soon overtakes them: they are snowed in. Next spring, half-insane with cabin fever, cold, and hunger, they stagger back to Butcher’s Crossing to ﬁnd a world as irremediably changed as they have been.

John Williams (1922—1994) was born in Texas. He taught for many years at the University of Denver, where he was head of the creative writing program. Williams won the 1973 National Book Award in fiction for Augustus. His novel Stoner is also published as an NYRB Classic.

Michelle Latiolais is an associate professor of English at the UC Irvine. Her novel, Even Now, won a Gold Medal from the Commonwealth Club of California. She has recently published fiction and essays in The Antioch Review, Santa Monica Review, and ZYZZYVA.

"One of the finest books about the elusive nature of the West ever written...It's a graceful and brutal story of isolated men gone haywire." --Time Out New York

"Harsh and relentless yet muted in tone, Butcher's Crossing paved the way for Cormac McCarthy. It was perhaps the first and best revisionist western." --The New York Times Book Review

"One of the finest novels of the West ever to come out of the West."--The Denver Post

“Butcher's Crossing is perhaps the finest western in literature. John Williams may have published only a few novels, but they were all just about perfect. Although the subject and story is much different than Williams's Stoner, Butcher's Crossing is equally beautiful, heartbreaking, and historically accurate." —Jeffrey J, Powell’s City of Books blog

"Williams didn't write much compared with some novelists, but everything he did was exceedingly fine...it's a shame that he's not more often read today...But it's great that at least two of his novels [Stoner, Butcher's Crossing] have found their way back into print." --The Denver Post

“Reading John Williams–even to have done so at the time these novels were written–is an exercise in nostalgia, a nostalgia found also in writers like Willa Cather, for whom the West represented a lost redoubt of intellectual dignity...It is tempting to say that Cather's tradition flagged because the West has changed – it is no longer anybody's bildungsroman–but it is safer to say that writers as talented and right-minded as John Williams are not naturally plentiful.” –New York Sun

This story about the hunt of one of the last great buffalo herds "becomes a young man's search for the integrity of his own being...The characters are defined, the events lively, the place, the smells, the sounds right. And the prose is superb, a rarity in writing about the west. More, John Williams."--The Chicago Tribune

"John Williams's unsparing novels express a highly qualified though resilient optimism about our ability to salvage something of value from life's impossible conditions. Along with the necessary isolation of the artist, he conveys the sobering if startled recognition--perhaps with his own career in mind--of the transitory triumph of art."--Times Literary Supplement

“Butcher’s Crossing dismantles the myth of the west, revealing a horror story about the grinding day to day of just surviving…[a] restrained and gorgeous lyricism…even in its softer moments it doesn’t overdo anything, and the moral criticism is in the precision of the language, the now-famous simple and elegant Williams prose.” —Bret Easton Ellis, The Guardian